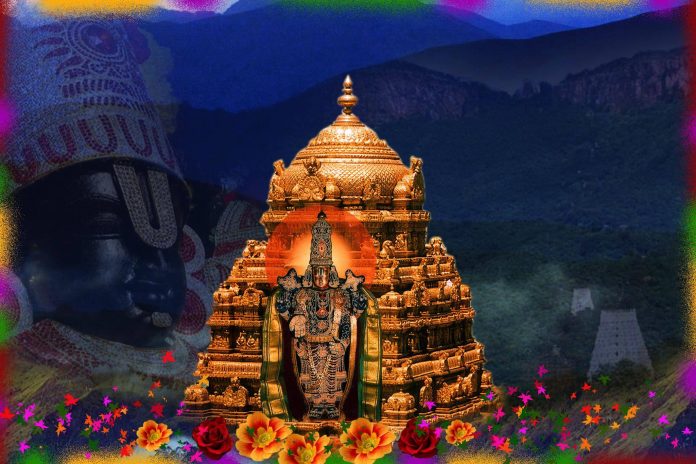 Srimad-Bhagavatam describes the history of Tirumala that during Satya yuga, Hiranyaksha, due to his exploitative activities created a situation where the earth was drowned to the bottom of the Garbhodaka ocean. At that time, the demigods approached Lord Brahma who prayed to Lord Vishnu. Lord Vishnu then appeared from the nose of Brahma in the form of Sri Varahadev. He killed Hiryanaksha and lifted the earth, ‘Bhudevi’ with His tusks, and brought her to a safe position on top of the Garbhodaka ocean. 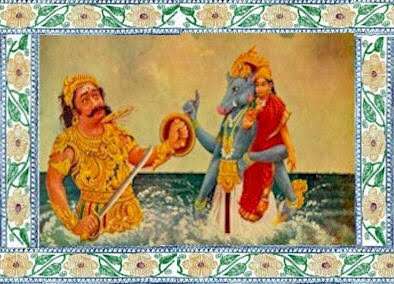 Bhudevi, the goddess of the earth, being an expansion of Goddess Laxmi was very much pleased to be reunited with Her Lord, Her eternal consort in the form of Sri Varahadev. In Vaikuntha ‘Bhu-Varaha’resides eternally, so Bhudevi, who is the goddess of this earth, pleaded Lord Varahadev to remain with Her on this earth planet. Sri Varahadev decided to satisfy her desire and called for Garuda to fly to Vaikuntha and bring one of His favourite mountains down to the earth, so that He and Bhudevi could reside here together on that mountain. That mountain was brought down, and it is today called ‘Tirumala’. It is the mountain that was carried from Vaikuntha by Garuda himself. 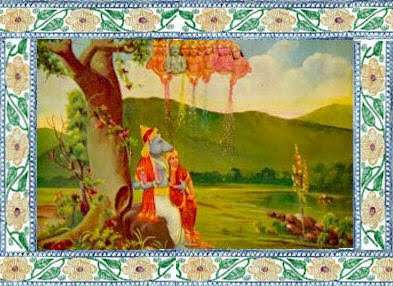 There is also a story of Sesa for the history of Tirumala, the divine expansion of the Lord who sometimes appears as His couch, sometimes as His bed, and sometimes as His slippers, the same Adisesha incarnated on this earth as the seven hills in which Tirumala is situated. Therefore the seven hills are called Seshadari. Knowing that the Supreme Lord would come to live on these hills, Sesha wanted to be there to support His divine pastimes. Bhrgu Muni sets to find out the Supreme amongst the trinity 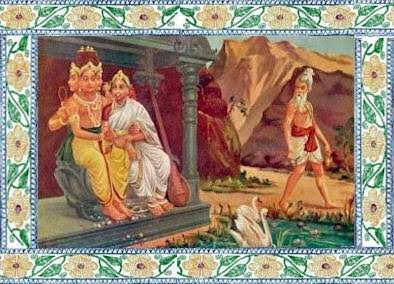 Bhruga rishi first went to the abode of Brahma. Brahma, the father was very happy to see his son, Bhruga Muni. But Bhruga Muni did not say anything to honor his father. In fact he outright ignored him. When Brahma understood that his son was completely breaching all etiquette and basic human manners, he became very angry. Still, somehow or other he contained his anger and didn’t say anything. But Bhruga Muni noticed that his father was very angry, and he left the place. Lord Brahma had failed the test, being come under the influence of anger. 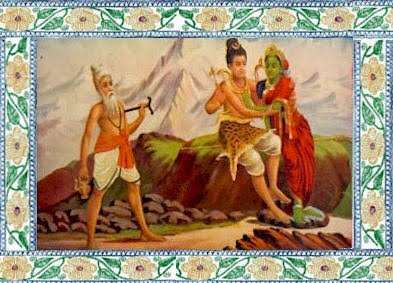 Then Bhruga Muni went to mount Kailash where Lord Siva sat with Mother Paravati. When Siva, Bhruga Muni’s elder brother, saw his younger brother, he came up saying, “Oh, Bhruga , I am so happy to see you. Welcome to Kailash.” He came to embrace Bhruga Muni but Bhruga Muni stopped him saying, “Get away from me. Don’t touch me. You smell terrible. You have ashes from dead bodies smeared all over your body. You wear skulls as garlands. You associate with ghosts and untouchables. If you were to touch me, I would have to immediately take bath in the Ganges, just to purify myself from the intense contamination.” 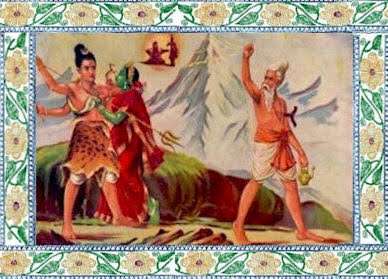 Lord Siva, upon hearing Bhrgu’s insulting words became very angry. He picked up his trident and was about to punish Bhrgu when Paravati intervened and said, “No, my Lord, he is your brother.” Lord Siva then cooled himself down and Bhrgu Muni left the place. Even Lord Siva had failed the test. 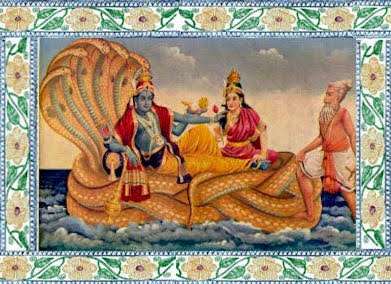 Bhruga Muni then went to Swetha Dweepa, the Vaikunta planet within this universe where Vishnu resides. Lord Vishnu lay on His bed, being served by Laxmi devi the goddess of fortune. While the Lord was lying down, Bhruga Muni charged in and kicked Him right onto the chest. Lord Vishnu very compassionately, with folded hands said, “Oh, Bhruga Muni please forgive me, please forgive me, that you came in and I didn’t even get up to honor you, to welcome you to my home. My chest is so hard, and your lotus feet are so soft, I am afraid; I must have caused some pain to your feet. Please let me massage your feet.” 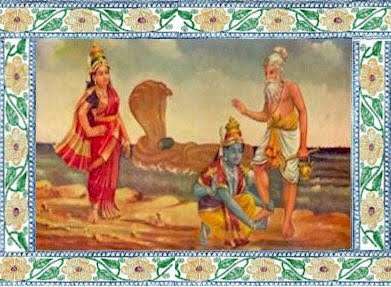 Speaking thus, Vishnu began to very gently massage the lotus feet of Bhrgu Muni, who being so treated began to weep, and tears flowed from his eyes as he spoke “You are the Supreme Personality of Godhead. You are completely transcendental to the modes of material nature. You are all merciful, all compassionate even to an offender like me, please forgive me.” According to Sri Caitanya Bhagvat, after begging forgiveness, Bhrgu Muni seeing the qualities of Lord Vishnu, began to dance in ecstasy. He danced and wept and cried as his hairs stood on end and he went on loudly chanting the holy names Hare Krishna Hare Krishna Krishna Krishna Hare Hare, Hare Rama Hare Rama Rama Rama Hare Hare. Bhruga Muni then blissfully returned to all the sages and narrated his report.

Everyone from that day on wards consistently worshiped Lord Vishnu by constantly hearing His glories and chanting His Holy Names. Everything was blissful, but Laxmi devi felt very depressed and angry. Although Lord Vishnu had tolerated the offence committed by Bhruga Muni with a very gracious heart, Laxmi devi being a chaste and faithful wife, could not tolerate the offence that was done to her husband.

She said to Lord Narayana,“You may forgive this person for that is your nature. But I have seen this Brahmana whimsically kicking You right in the chest. And because I have seen this abominable act, I have incurred a very heavy unforgivable sin and the sin of witnessing You accepting this offence is so great that I cannot live here any longer. I must go away from here. I must perform severe penances in order to wash away the sin that was incurred by my seeing this offence to You.”

In 1843 the administration of the shrine and its estates was formally handed over to Sri Deva Dossiji of Hatiramji Mutt at Tirupati. Subsequently, in 1932 the management of the Temple was handed over to when Tirumala Tirupati Devasthanams (TTD), a non-profit organisation that was established to protect this important religious heritage. The TTD runs various charitable trusts with the proceeds from the pilgrims.

The main temple spans about 2.2 acres in area. Stretching 415 feet in length and 263 feet in width. Devotees pass through the Maha Dwaram/ padivaakili is 50 feet tall, outer gopuram or tower entering an open courtyard marked by ornate flag staff called the Dhvajasthambham. As they walk, to their left is the Ranganayaka Mandapam. To the right is the Aina Mahal, a hall of mirrors that reflects images in an infinite series. Devotees pass through Vendi Vakili, a silver entrance into the main sanctum where they come upon the Bangaru Vakili or Golden entrance. Within the Bangaru Vakili is a threshold beyond which most pilgrims cannot go.  Here, a series of dark halls leads the way to the inner sanctum. Each chamber narrowing in width. Many believe this narrowing symbolizes the soul’s journey into the womb of the divine. Which is why, perhaps the innermost sanctum where the main deity resides is referred to in Sanskrit as Garbha Griha or womb-like chamber.

Temple administration is managed by TTD . You can book tickets online at https://tirupatibalaji.ap.gov.in