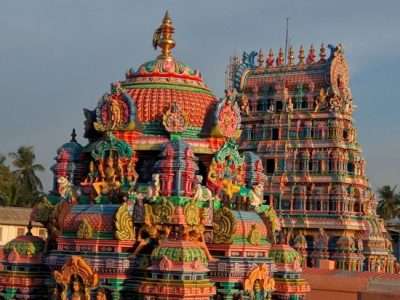 Swamimalai (‘the hill of the lord’), is located at a distance eight kilometers from Kumbakonam in Thanjavur district on the northern banks of the river Cauvery. It is one of the six famous abodes (Arupadaiveedu) dedicated to Lord Muruga (also spelt Murugan). Lord Muruga preached Pranava mantra ” OM ” to Lord shiva and that why he is called “Swaminathan”.

The temple is built on an artificial hill and is reached by a flight of steps. It is believed that the sixty steps of the temple ascending to the sanctum sanctorum represent the sixty months of the ancient Tamil calendar. Lord Shiva enshrined at the foot of the hillock is known as “sundaresar” and the Devi is known as “Meenakshi”. Swamimalai is also known as the Kshetra for enlightenment.

Once, as a child, Shiva asked his son Muruga the meaning of ‘Om’ or the Pranava mantra. Muruga replied he would answer if asked politely, devoid of ego. So Shiva knelt beside his son and bent his head close to his mouth. And the voung Muruga explained the concept of ‘Om’ to his father. It is this legend that Swamimalai celebrates. Swamy refers to Shiva and ‘nathan’ means lord’ or ‘mentor – Shiva’s mentor.

Also known as Thiruveragam and Gurugiri, the temple was built by early Chola and later by Nayak kings. A hill of erected for Subrahmanya’s sanctum. Sixty steps, stone was corresponding to the number of years in each cycle of the Tamil calendar, leads up to the sanctum.

The raja gopuram has scenes from the Skanda Purana sculpted on it. The sthalavriksha, a Nelli tree, is here as is the Vajra Theertham, the temple tank.

The idol of Swaminatha in the main sanctum is truly majestic. Over six feet tall and handsomely proportioned, he holds a staff in one hand while the left hand lightly rests on his thigh. The deity is adorned beautifully during all the pujas, but on Thursdays he wears a golden body vest and a gold crown. The base of the idol is shaped like an Avudaiyar, or the base on which a lingam rests. The inference is that Shiva and Swaminatha have merged in this idol.