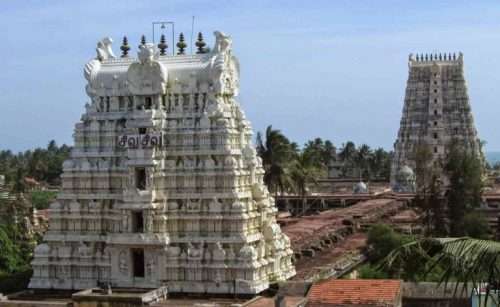 Ramanatha Swamy at Rameswaram Temple is a jyotirlingam, that is, he is seen as a shaft of light. In the main sanctum is the lingam Sita had built of sand. The other is a spatika lingam (crystal) worshipped as Kashi Vishwanathar, built by Hanuman. Both are small and swathed in  white cloth and adorned with rudrakshas and vilvam garlands. He is a compassionate deity,granting absolution from all sins to the devout.

The idol of Parvathavardhini, the consort of Ramanathaswamy in a separate shrine, is about 3ft-tall and is elegantly draped in cotton or silk saris and choice jewellery.

The temple was established between the 8th-9th centuries. It was properly built and expanded only after the 12th century by Parakrama Bahu of Sri Lanka.The Sethupathy rulers of Ramanathapuram completed the rest while grander additions were made by Nayak rulers in the 18th century. The rulers of Travancore, Mysore and Pudukkotai also contributed significantly to the temple. Temple is Spread over 15 acres ,it has a raja gopuram that is 173ft high. It features 1212 pillars. Their alignment is a photographer’s delight. The surrounding wall of the temple complex is massive. Facing the main sanctum is a gigantic Nandi. Apart from the main sanctums, there are two other important sanctums: that of Vishnu as Sethu Madhava and that of Shiva as Nataraja. The latter sanctum is decorated entirely with rudraksha garlands and is awesome to behold.

Returning victorious from the battle of Lanka, Rama stopped at Rameswaram. To absolve himself of the sins of killing in war as well as slaying Ravana, a Shiva bhakta, Rama conducted a yagna. He sent Hanuman to fetch a lingam from Mount Kailash. Hanuman, however, did not return in time for the worship. So Sita fashioned a lingam out of sand known as Ramalingam for the yagna. Soon after, Hanuman returned, bearing a crystal lingam. Disappointed that the yagna was over, Hanuman tried to push the sand lingam away with his tail and place the Vishwalingam he had brought in its place. No matter how hard he tried he could not move the sand lingam (the Ramalingam is said to bear the marks of Hanuman’s tail even today). To placate him Rama said the Vishwalingam would be worshipped first. Even today the day’s worship begins at 5.10  AM with a deeparadhana for the spatiga lingam.

There are 53 Theerthams (holy springs) in Rameswaram, of which 21 are within the temple. (21 is the number of arrows in Rama’s quiver which he used to pierce the earth and draw up water). The ones inside the temple are wells and bathing in these is said to cleanse one’s soul of all sins. After a dip in the sea (known as Agni Theertham), devotees wear the same wet clothes and walk into the temple in order to bathe in the 21 wells. Guides will, for a fee, help devotees by taking them to the wells and pour water on them by the bucket. Devotees can change in the pavilions nearby but these are not very clean. You can also change in any of the choultries on Sannadhi Street. Changing is a must, as one cannot visit the sanctum in wet clothes. Usually the wet clothes are given away as alms to the poor. Many pilgrims bring Ganges water from Varanasi to bathe the lingam in the sanctum to complete their pilgrimage from kashi to Rameswaram.