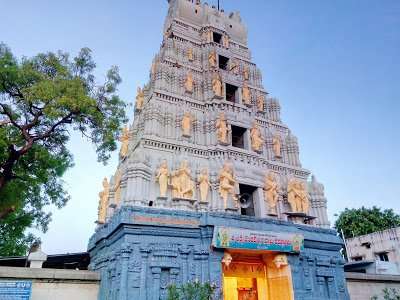 Rashtrakutas, Vaidumbas and Kakateeyas ruled this region. The kings of Vijayanagara ruled this area nearly two hundred years. Many inscriptions, temples and tanks proved that the name and fame of these rivers and hills or getting protected till today.

This renowned kshetra is situated in Devuni Kadapa in Kadapa district, Andhra Pradesh. This is the most renowned and ancient temple. Devuni Kadapa is also known as Tirumala Tholi Gadapa Devuni Kadapa. The place Kadapa is named after the word Gadapa which is originated from the word “Devuni Gadapa” meaning “entrance for Lord Venkateswara Swamy”. In ancient occasions, it was the way for the pilgrims to go to Tirupati. It was traditional and customary that devotees have to visit initial Sri Lakshmi Venkateswara Swami Temple at Devuni Kadapa. The tradition is still in practice even today.

Temple will be open for Darshan from 6 AM to 8 PM.

The temple at Devuni Kadapa is very ancient. It is a known fact that Sri Krupacharya installed the Lord in Devuni Kadapa. Tirumala is called Varaha Kshetra and Devuni Kadapa is named Hanumad Kshetra. The statue of Lord Anjaneya is at the back of god, the father. Lord Venkateswara is the Protector of the devotees at this kshetra. Swami Desikan who belonged to the 14th century was a well-known Vaishnavacharya and a true devotee of Lord Venkateswara. Sri Harihara Raya, and Sri Bukka Raya the founders of Vijayanagara Empire, Sri Narasimha Raya of Salva dynasty, Andhra Bhoja Sri Krishna Devaraya offered most precious jewels and some land property to this temple. Nandyala Avubhaleswara Devamaharaj donated some land for the ‘kainkaryam’ to the Lord. In 1484 Maha Mandaleswara Timmaya Deva Maharaj offered the income that comes from a village in Udayagiriseema to the temple. In 1396, Sri Aranam Sarvappa offered crown to god, the father. In 1629, Sri Maha Mandaleswara Obula Raju provided ‘Maanyam’ to the Lord. In 1480, Sri Sadasiva Deva Maharaya donated some property to the Deity. In 1476, Sri Chinna Avubhala Raju donated some land for Lord’s garden and four various other devotees donated property to this temple. These details were described in the inscriptions found on the walls of the temple.

It is said that Annamayya, the saint poet and composer, served god, the father directly for some time in Kadapa. He called the Lord ‘Kadapa Rayudu’ and ‘Venkatadri Kadapa Rayudu.’ Sri Annamayya referred to the Festival of Chariot in a music as : The chariot of god, the father, ‘Kadapa Raya’ is an eye-feast to the devotees. The grace of the Lord is definitely indescribable. Lord Venkateswara along with His Consort Goddess Lakshmi climbed His Chariot and wandered in the streets gracefully.

Sri Kshetrayya (1600-1680 A.D.) a great singer also eulogized the Lord. Many poets of great devotion towards god, the father praised Him. The sculptural beauty in the premises of the temple is usually marvellous. The ‘Mandapa’ near to the Lord was built in the days of the kings of Vijayanagara. In it there was the idol of Lord Thandava Ganapati. It is assumed that the ‘Murthis’ of a couple located on a pillar in the temple belongs to the dynasty of the kings who constructed the temple. It is believed that the Rajagopuram of Lord Govindaraja Swami’s temple in Tirupati was built-in the same time. The famous English man Sir Thomas Monroe who proved helpful as Collector served the Lord and extended his helping hand for the necessary fixes on the Gopuram of the temple. The Company government offered substantial economic assistance to the temple. It provided 72 ‘kanterayi’ varahas to Lord Venkateswara, 86 ‘kanterayi varahas to Rathotsavam, 30 ‘kanterayi varahas to Lord Anjaneya, 24 ‘kanterayi varahas’ to Lord Someswara Swami.

It had been mentioned in the 4th Volume of Mekanji Kaifiyath that, every Saturday temple priests of Devuni Kadapa offered worship to Lord Palakonda Rayudu who is near the temple of Lord Sri Lakshmi Venkateswara Swami. The statue of Lord Hanuman was situated at a high place on the wall at the back of god, the father in the ‘Sanctum Sanctorum’. In front of the statue of Lord Hanuman, the main statue of Lord Sri Venkateswara Swami as Moola Moorty faced the Western side. On the right part of the bosom of the Lord, the Murti of Goddess Lakshmi with Sri Vatsa symbol was carved. On the statue of god, the father, ‘Yajnopaveetham’ and the ornaments for the throat were carved gracefully. The unique shrine of Goddess Mahalakshmi was located at the left aspect of the Lord. Once the wicked people spoiled the statue of the Goddess with stokes of hammer. It is stated that the present statue was installed two or three centuries ago. On the dome of the temple of the Goddess, there were stone lizards. If the devotees touch the two lizards in Kanchi, their sins would be washed away. The beautiful two statues of Jaya and Vijaya were seen in the temple.

Inside the ‘Prakara’ of the temple , there have been the temple of Lord Vishvaksena, the idols of ‘Nagas’, Lord Vinayaka, the ‘Mandir’ of goddess Andal, ‘Sami’ tree, ‘Dhanurmasa mandap,’ a well, ‘Potu,’ ‘RadhaVahana sala’, ‘Yagasala,’ Alwars’ Sannidhi, ‘Vahana Mandapam, ‘Alankara Mandapam, ‘Addala Mandapam,’ ‘Kalyana Mandapam,’ ‘Garudalwar’s Sannidhi,’ ‘Tulasi Bridavan,’ ‘Bali Peetham’ and ‘Bharata Mandapam’. The top of the Kalyana Mandapam was very glorious. The pillars of rock on the four sides of the temple had been magnificent. ‘Bharata Mandapam’ was a special attraction to the viewers.

Some Features are
1. The Pushkarini at Devuni Kadapa belongs to 6th century.
2. According to stone inscription, Prouda Devarayalu II built a ‘koneru’ in Dundhubhi i.e., 1442 Bhadrapada Sukla Ekadasi. The inscription was visible on the rock which is definitely below the ‘Ranga Mandapam’ in the temple. It is said that the inscription was based on the Kaifiyath in the story of Kadapa.
3. Sri Matla Anantha Raju constructed the compound wall of the temple.
4. The Gopuram of Lord Lakshmi Venkateswara was constructed at Kadapa in “Kumpini days.”
5. 167 kanti stone varahas were offered to the Lord every year by the Kumpinies. They expanded their helping hands for organizing Rathotsavam, to Lord Hanuman and Lord Someswara Swami also.
6. When Sri Matla Kumara Anantha emerged for the ‘darshan’ of the Lord, he built some rest houses for stay. The location of these houses was called Chinnapalem.

There were two tanks near to Devuni Kadapa. These two tanks seem to be one to the onlookers today. In ancient instances Sri Veluri Brahma Reddy renovated them. His sisters, Peddakkamma and Chinnakkamma were drowned in the tanks due to heavy rains in the region. Sri Brahma Reddy is one of the moments of Telugu Cholas. The worship to the statues of Peddakkamma and Chinnakkamma offers been going on the tank bund even today.

Swami Pushkarini is quite spacious. It is known as Hanumad Pushkarini. There can be ‘Niraya Mandapam’ in the middle of it. Boat Festivals had been arranged in the ‘Pushkarini’ from Vaisakha Suddha Trayodasi to Pournami in a scintillating way that dazzles the eyes of the innumerable devotees of god, the father. The Event of Chariot of Lord Lakshmi Venkateswara is certainly a gorgeous eye-feast to the devotees. The festival attracts a large amount of pilgrims from Magha Suddha Padyami to Saptami from different areas every year. It really is visible that Lord is normally ‘Antaryami.’ Near to the temple, there were temples of Lord Anjaneya, Lord Siva and Goddess Durga.

In the temple, many kinds of worship and many types of festivals were done as per the Paancharatra Agama Shastra. There have been also ‘Shad Berams’ in the temple. It is the particular feature in the temple. Under the aegis of the Tirumala Tirupati Devasthanams, the temple provides been flourishing in all aspects and it is attracting its innumerable devotees since October, 2006.

How to reach Devuni Kadapa