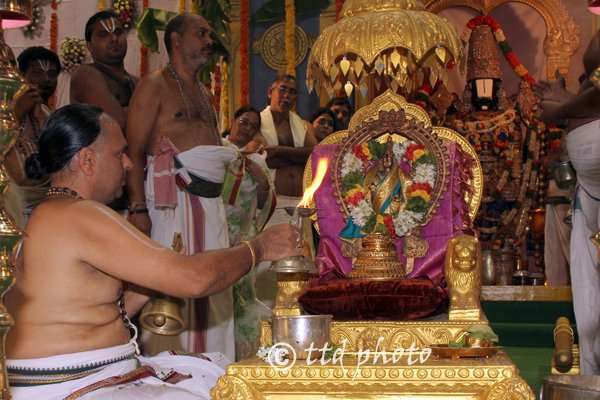 After the Tomala Seva, there will be Koluva (Court) or Koluvu Srinivasa Murthy who is placed on the throne in the Snapana Mandapa of the Golden Entrance, Tirumala. The particulars of tithi (the number of the day in a month), vaara (weekday) and nakshatra (the presiding star) of the day are read from the Hindu Calendar (Panchanga Shravanam) along with the income and expenditure statement of the earlier day to this deity. Later the Lord is offered the mixture of jaggery and sesamum flour as naivedyam. On the Dhvajaarohan day (Flag Hoisting of Garuda), the first day, however, the Koluvu takes place before the Golden Entrance.

Every day during this event, Srinivasa gives rice along with betel leaves and honorarium (dakshina) in charity (Tandula Daanam) to the priests. The priests bless Lord Srinivasa to be wealthy every day (Nityaishvaryo bhava). This takes place in complete solitude.