Maa Kamakya Devi or Kameswari is the famous goddess of desire. Maa Kamakya shrine or the Kamakya temple is located at the heart of Nilachala Hill situated in the western part of Guwahati on adjoining banks of Brahmaputra River, Assam in North East India. This temple is considered as the most sacred and the oldest of the 51 Shakti Peethas on the Earth. Kamakya temple is one of the important pilgrimage site for all sections of Hindus specially for the ‘Tantric’ worshipers.

Kamakya temple is also a part of the 4 Adi Shakti peethas. This temple is special since  the womb or the vagina of Sati Devi (wife of Shiva) fell here at this place. Therefore, this deity is also called as the ‘Goddess of fertility’ or the ‘bleeding Goddess’.

Kamakya temple is the main temple in a complex of individual temples of dasamahavidya (ten incarnations of deity). Dasamahavidya includes Bhuvaneshwari, Bagalamukhi, Chinnamasta,Tripurasundari, Tara, Kali, Bhairavi, Dhumavati, Matangi and Kamala Temples. Out of these temples Tripurasundari (i.e. Kamakya), Matangi and Kamala reside inside the main temple. The other seven temples are located individually on the hills of Nilachala. There are 5 temples which are dedicated to Lord Shiva namely Kameswara, Siddheswara, Kedareswara, Amratokeswara, Aghora and Kautilinga are situated around Nilachala Hill. These temples are said to be under the Kamakhya Temple Complex.

In this temple Kamakya Devi bleeds or menstruates in the month of June or Aashaad. This is reason why she is called as menstruating or bleeding goddess. At the period of menstruating the river Brahmaputra near Kamakya turns into red color. The temple remains closed for 3 day at this time. The holy water in red color is distributed among the devotees of Kamakya Devi.

Kamakya temple is considered to be important for Black Magic or any other Tantric practices. It is said that, people could experience the real powers of the temple when they are genuinely suffered or suffering from any kind of evil force, paranormal experiences and other black magic forces. The reason behind the curing of such negative forces is because here, in this temple Goddess Kaali is present in ten different forms. The sadhus living around the temple offer the puja for the relief of black magic.

The rituals that are included in the removal of Black magic are as follows:

To complete this puja it takes around 4-5 hours of time.

Description of the Temple

The structure of the temple has been renovated many time from the 8th to 17th Century. The present type of structure is called as Nilachal type- a temple with a hemispherical dome on a cruciform base. The temple consists of four chambers: garbhagriha and three mandapas namely calanta, pancharatna and natamandira. These three mandapas are aligned from east to west.

Temple is open for all the days of the week

Kamakya temple gets open at 5:30 AM and gets closed at 10 PM

The door for devotees opens at 8:00 AM

The gates of the temple gets closed for the night at 5:15 PM  (the entry gets shut at this time)

How to Reach Kamakya Temple

One can reach the temple by road, by air and by train.

By Air- the nearest airport is Gopinath Bordoloi Airport at Borchard and is 14 km away from the main city.

By train- Kamakya city has its own railway station named Kamakya. But, the recommended railway station is D- board at Guwahati since maximum number of trains come from major cities of India. The distance between these two railway stations is 6 km. Therefore, there should not be a problem in reaching the temple.

By road- Kamakya temple is connected to the city center. Guwahati is connected to other parts of the country by road. Visitors can hire an auto rickshaw or a cab from any part of Guwahati to reach the temple. There is even an availability of regular buses of Assam Tourism Department.

How Ambubachi Mela is celebrated

It is believed that Devi Kamakya passes through the annual cycle of menstruation for three days in the month of June or Aashaad. The doors of Kamakya Temple remains closed for these three days. 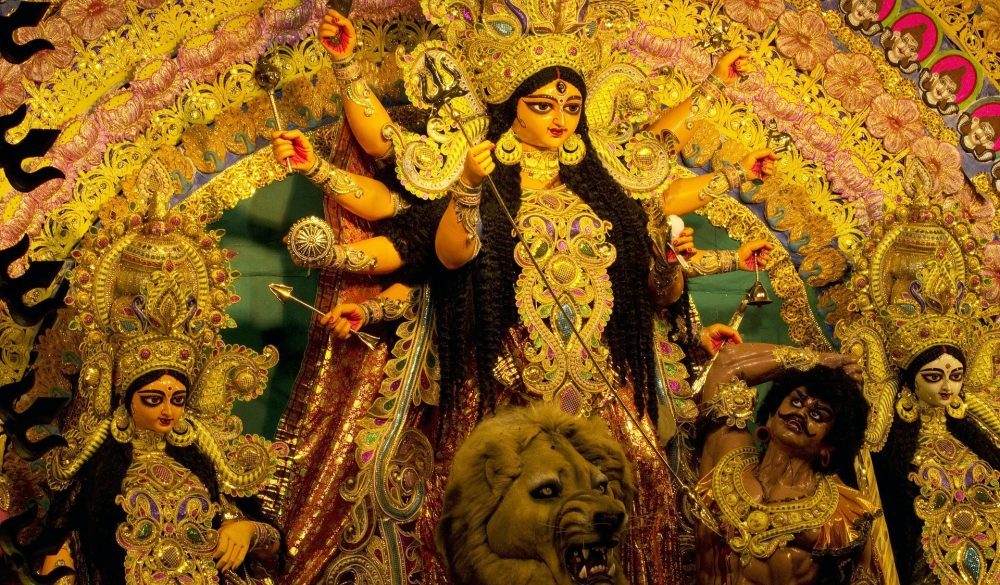 During the first three days of Ambubachi Mela, all the temples on the Nilachala hills also remain close. During these three days of menstruation, Maa Kamakya is given a bath and dressed everyday by the priests of the temple and she is offered a silk cloth for her menstrual flow.

On the fourth or the final day of the festival, Goddess is given a holy bath and is worshipped. The devotees wait for her(Bhagavati) darshan after the menstruation cycle. The devotes are given a small piece of Rakta Batra the red silk “blood cloth” – this is the white cloth which got red due to the menstrual fluid of Goddess Kamakya. This piece of cloth is considered to be very sacred and powerful.