The Sun Tempe in Konark (Konark Sun Temple) is dedicated to Surya (Hindu Sun God). Sun Temple was built in the 13th Century CE. This temple represents the way how Sun God roams about in his Royal Chariot. The structural formation of the temple can be found during/ in Kalinga. Sun Temple is an Indian Temple, where people from all sects worship Sun God as, it is necessary for everyone to worship Sun God in the Indian tradition. Sun Temple was built by King Narasimhadeva 1, between 1238-1250 CE. It is said that, Samantaraya Mahapatra was the in charge of the construction. Konark means ‘sun and the four corners’.

The Konark Sun Temple was also called as the ‘Black Pagoda’ attributed to its dark facade by the Europeans and they used it for the navigation purposes. It is believed and said that the temple could draw ships to the shore due to its magnetic powers. The Konark Sun Temple is locate on the eastern shores of the Indian Subcontinent and is just 35 km away from famous religious place Puri, Orissa.

Sun Temple is also a UNESCO World Heritage Site. Sun temple is a model of ancient artistry, fluidity of ideas. The special aspect of this temple is that, the first rays of the Sun fall on the entrance of the Temple. It is said that, this temple is an interpretation of a great imagination.

The temple is known for its Kalinga architecture including the depiction of a 100ft tall/high chariot, pulled by horses and wheels, carved out from a single stone. The monument portrays the imposing chariot of the Sun God. This monument was built of Khondalite Rocks, it is said that the original temple had 230ft high sanctum sanctorum, which no longer exits. There is an audience hall, 128ft high; dance hall etc. There 12 pairs of wheels (24 wheels), each wheel is 12ft in diameter. These wheels are drawn by seven horses. Horses represent the week, wheels indicate 12 months of the year and the day-cycle is represented by the 8 spokes present in the wheel. The whole depiction represents how the time is controlled by the Sun God- the illustration of Surya in the Indian Mythology, travelling from east to west in his chariot. 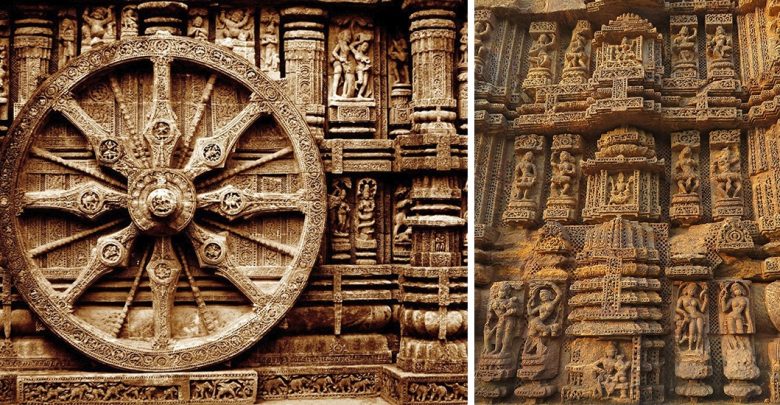 The entrance of the temple leads to the main shrine of Surya Bhagwan. There are many carvings of various figures including Hindu gods, images of everyday mortal life, animals, birds and many more on the walls of the temple.

The temple is open throughout the year