The Amman (goddess) is clad in the traditional attire of young south Indian girls – a long skirt that stops just above the ankle, a silk upper cloth and blouse.The idol is made of black granite but the face is usually anointed with sandal paste. While she is always adorned in several pieces of jewelry, the most striking are her solitaire diamond nose-stud and bullakku (a diamond pendant that hangs from the ridge between the nostrils, above the upper lip). In the light of oil lamps in the sanctum these diamonds dazzle like points of fire. In her right hand the deity carries a looped necklace. Her left hand is gently curved in blessing. This is a young woman standing in the pose of a bride awaiting the arrival of her groom.

The Bhagavathi Amman Temple in Kanyakumari stands facing the spot where the three oceans meet. For the pilgrim, here stands a goddess who is so charming to look at that merely seeing her is considered blessing enough. Witness the bright colours of a sunset and soothing hues of moonrise at the same time above an expanse of blue that is a rate mix of three oceans, the Bay of Bengal, the Arabian Sea and the Indian Ocean. Stand by the sea front and take in the vista of the oceans and dark sands. The legend of goddess Kanyakumari who stands as bride-in-waiting, adds to the atmosphere. 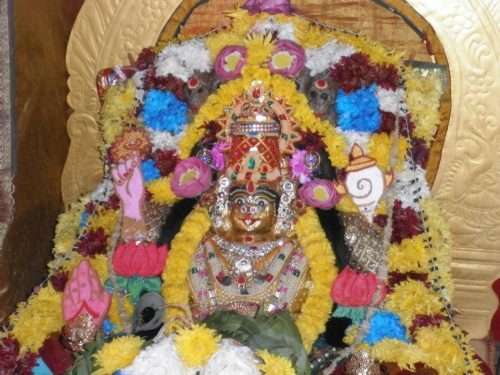 After Independence Kanyakumari became part of Tamilnadu though the rituals still follow the mode of worship in Kerala’s temples.

Banasuran, began harassing all on earth and heaven. The gods appealed to Shakti (Parvati) as only a virgin girl could kill Banasuran. Shakti manifested herself as a girl at Kanyakumari. As she grew up to be a maiden Shiva came to marry her. Sage Narada, thinking she would not slay the demon following her union laid a condition that Shakti and Shiva should marry before daybreak. Shiva proceeded to the venue while the bride awaited her groom. Enroute Narada took the form of a rooster and crowed loudly. Thinking the day had dawned, a disappointed Shiva stopped travelling and stayed at Suchindram. Realising her groom would never arrive. Bhagavathi Amman remained a virgin or a kanyakumari even after she had slain Banasuran. 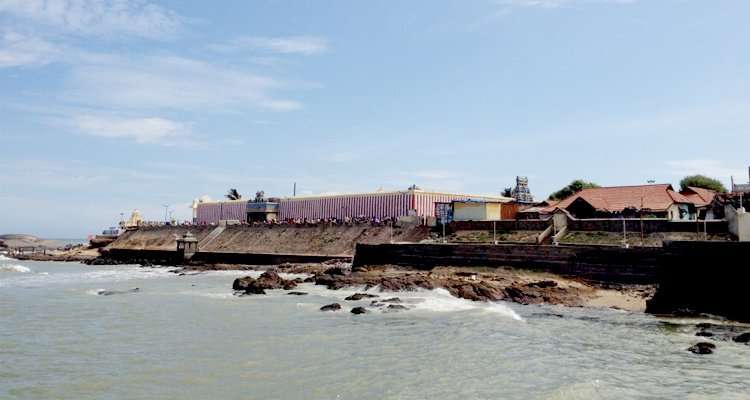 Vaisakha Festival during which procession of the deity around the temple on various mounts and on the temple car attracts big crowds.

Places To Visit Around Kanyakumari

Its a Shiva temple,close to Kanyakumari railway station, is 1000 years old, built by Rajaraja Chola.

Drive 14km from Kanyakumari to this magnificent temple which features the trinity of Hinduism, Brahma, Vishnu and Shiva in the same lingam. The base of the lingam represents Brahma or Ayan, the middle represents Vishnu or Mal and the top represents Shiva or Sthanu. The silver casing of the lingam towers upwards in a series of 16 crescent moons under the canopy of a serpent.
In the hollow of a 2500-year-old Punnai tree in the temple is a natural lingam that has a gold plated casing etched with images of the trinity. Nearby is a gigantic Nandi (said to have been made of crushed shell). The temple is an architectural marvel. North-east of Kanyakumari, is a circular granite fort built by the Travancore king Marthanda Varma. It is a sturdy, rectangular fort with a small river running nearby. It is now a holiday resort and picnic center.